The end of the Gothic style era was the Late Gothic (1280-1500) “Flamboyant”. These architectural designs were more colorful and vibrant than the “Rayonnant” style, focusing on flame like curve in the stone window to give more of an even flow and to create even larger ceiling spaces. The style has grown and became more popular, many town halls and domestic residences were being constructed with that style more than the cathedrals and churches at that time.  One of the most noticeable features was the partiality for giant interior arcades. “In France, Flamboyant Gothic architecture eventually lost its way - becoming much too ornate and complicated - and was superseded by the classical forms of Renaissance architecture imported from Italy in the 16th century”.[1] 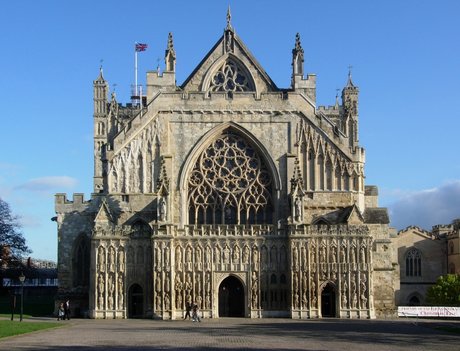 Cathedral of Exeter was being constructed in 1112 but was finished  and completed after many renovations in 1369. Unlike many other English cathedrals, the Exeter was never damaged or set on fire. With the many renovations it had, the cathedral had many successful enterprising bishops who wanted make it more up to date and memorizing. The rib-vaulted ceiling continues in the choir, which overlooks the bishop's chair. 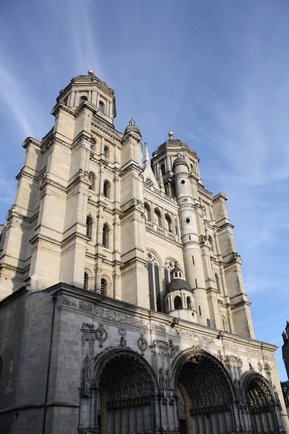 Dijon Gothic Cathedral was rebuilt after the Romanesque style in 1150 but was completed around 1300. The architect is not known, but it was built with Late Gothic style bringing a slimmer more effective architecture. All of the weight of the framing and the roof rests on pillars rather on flying buttresses, allowing the maximum floor areas for the interior. With having more space for the floor,  more furnishings and decor were allowed to show how the style differed from the other eras. The central space, flanked by columns, has three levels: six high arcades support by cylindrical columns with a gallery of high windows. Fifty-one gargoyles are on the western facade which were removed after a fatal accident. In the 13th century, the church had stained glass windows of high quality. Only five of these, made around 1235, remain; they are the lancet windows of the north transept. These represent episodes from the life of Saint Peter and Saint Andrew.